Halfmile’s Trail Notes notes have been updated for the 2021 hiking season!

The old Halfmile map PDF files are no longer being updated and have been removed from this website. Halfmile GPS data and Trail Notes are still available for hikers to download. Read about the changes at this link. 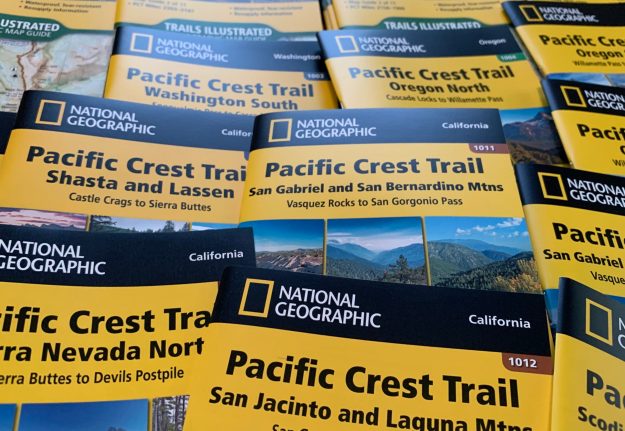 For almost two years I have been working with the cartographers at National Geographic on a series of new Pacific Crest Trail maps and they are now ready, just in time for the 2020 hiking season.

The new National Geographic PCT Maps are 11 map booklets, each one covering about 240 miles of trail. The booklets weigh about three ounces each (between 2.8 and 3.2 ounces to be exact) and are printed on waterproof, tear-resistant material. 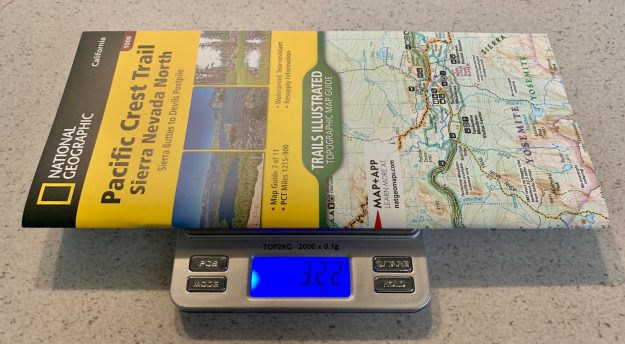 Each Pacific Crest Trail maps weigh between 2.8 and 3.2 ounces.

Maps can be purchased from the Pacific Crest Trail Association online store or other National Geographic Map retailers.

Here are a few samples of what the new PCT maps look like:

The Pacific Crest Trail in Southern California from the Sunrise Trailhead to Scissors Crossing.

Forester Pass in the Sierra Nevada, the highest point on the Pacific Crest Trail.

Each map page has an elevation profile of the trail.

I’ll have a more detailed blog post about this soon, but one interesting thing for Pacific Crest Trail hikers is the availability of the National Geographic PCT Maps in several smartphone apps such as Gaia GPS. Having matching printed maps and smartphone maps is a very powerful combination for hiker navigation.

The Pacific Crest Trail in Southern California from Sunrise Trailhead to Scissors Crossing on my iPhone in the Gaia GPS app. Compare this to the photo of the printed map above.

Note: No matter how good navigation apps may be, hikers should always carry printed maps. These new lightweight PCT map booklets make that easier than ever.

Over the years, many hikers have helped make Halfmile’s PCT maps better with updates, comments, and suggestions. I am especially appreciative for the months of work by Afloat, Crop Duster, David “White Jeep” Lippke, Tina Lippke, Dal Brandon, Dormouse and Dirt Stew, who spent thousands of hours creating new technology, helping log trails, editing maps and other information about the Pacific Crest Trail.

Halfmile’s PCT Trail Notes and GPS data will continue to updated — look for 2020 updates on this web site in January. The old Halfmile map PDF files are no longer being updated and have been removed from this website.

Disclosure: I make no money from PCTMap.net, National Geographic, or being Halfmile. At one time this web site was supported by hiker donations, but I stopped accepting donations in 2013. I encourage those who can to support the trail by donating to the Pacific Crest Trail Association.

We are sad to announce the end of life for the Halfmile Pacific Crest Trail app effective March 15, 2019. We no longer have the resources to continue updating the app.

Hikers will be able to download the Halfmile PCT App from the iPhone App Store or Google Play until March 15th. If the app is installed before then it will continue to work on your Smartphone. Keep in mind the Halfmile app has not been updated since 2015. It does not include data on the 2017 reroute in the Sierra Buttes (north of mile 1203 mileages will be off by 2.5 miles), some resupply information is no longer accurate, and at some point in the future (probably years from now) an update to your smart phone operating system may break the Halfmile app.

What about Halfmile’s PCT maps?
Halfmile PCT maps have been updated for the 2019 hiking season and are available for download now.

What PCT navigation app can I use instead of the Halfmile app?
Gaia GPS is our favorite GPS navigation app.
Pros: Powerful GPS navigation tool. Halfmile’s PCT GPS data is easily loaded into Gaia for offline use. Maps other than the PCT can be downloaded so you can navigate around large fire closures. Supports waypoint navigation for difficult situations (across miles of snow, for example).
Cons: Learning curve, especially for hikers unfamiliar with GPS navigation.

The Guthook Guides app is widely used by PCT thru-hikers. Guthook is more of a GPS-enabled trail guide but excellent for PCT hikers in most situations.
Pros: Easy downloading of trail data for offline use. Widely used by other PCT hikers. Useful information about town resources (accommodations, resupply, post offices, etc). Waypoint comments by other hikers can be very useful.
Cons: Gaia is more useful than Guthook in difficult navigation situations such as large areas of heavy snow or long reroutes around large fire closures. Guthook base maps show only a narrow area along the PCT.

Backcountry Navigator is another GPS navigation app popular with some Android smartphone users.

Gaia GPS reviews have been posted by PMags and Adventure Alan.

We have come to the unfortunate conclusion that the Halfmile Android and iPhone Apps will not be updated for the 2018 hiking season due to other commitments and lack of available time.

What does this mean for 2018 Pacific Crest Trail hikers? Halfmile Smartphone Apps will continue to work, but hikers might notice:

Hikers needing an app that uses the latest Halfmile PCT data could consider Gaia GPS or other apps that import GPX files. It’s easy to import Halfmile data into these apps using the data at this web page. 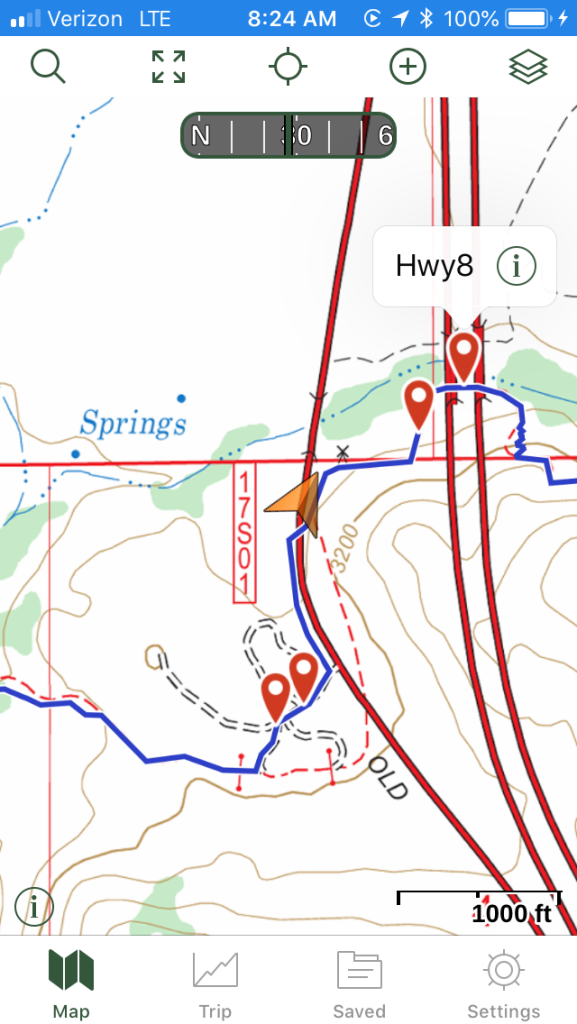 Halfmile data can be imported into the Gaia GPS or other smartphone apps.