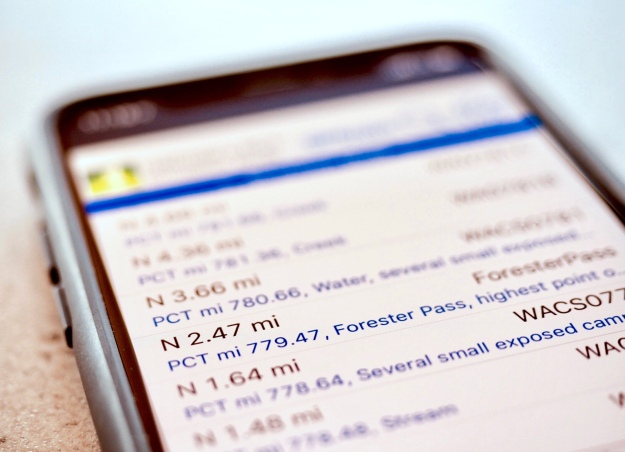 We are sad to announce the end of life for the Halfmile Pacific Crest Trail app effective March 15, 2019. We no longer have the resources to continue updating the app.

Hikers will be able to download the Halfmile PCT App from the iPhone App Store or Google Play until March 15th. If the app is installed before then it will continue to work on your Smartphone. Keep in mind the Halfmile app has not been updated since 2015. It does not include data on the 2017 reroute in the Sierra Buttes (north of mile 1203 mileages will be off by 2.5 miles), some resupply information is no longer accurate, and at some point in the future (probably years from now) an update to your smart phone operating system may break the Halfmile app.

What about Halfmile’s PCT maps?
Halfmile PCT maps have been updated for the 2019 hiking season and are available for download now.

What PCT navigation app can I use instead of the Halfmile app?
Gaia GPS is our favorite GPS navigation app.
Pros: Powerful GPS navigation tool. Halfmile’s PCT GPS data is easily loaded into Gaia for offline use. Maps other than the PCT can be downloaded so you can navigate around large fire closures. Supports waypoint navigation for difficult situations (across miles of snow, for example).
Cons: Learning curve, especially for hikers unfamiliar with GPS navigation.

The Guthook Guides app is widely used by PCT thru-hikers. Guthook is more of a GPS-enabled trail guide but excellent for PCT hikers in most situations.
Pros: Easy downloading of trail data for offline use. Widely used by other PCT hikers. Useful information about town resources (accommodations, resupply, post offices, etc). Waypoint comments by other hikers can be very useful.
Cons: Gaia is more useful than Guthook in difficult navigation situations such as large areas of heavy snow or long reroutes around large fire closures. Guthook base maps show only a narrow area along the PCT.

Backcountry Navigator is another GPS navigation app popular with some Android smartphone users.

Gaia GPS reviews have been posted by PMags and Adventure Alan.